Ready for the Encore: Finding Hope After Spinal Cord Injury

Rachael Johnson might live as a quadriplegic, a survivor who faces the challenges of a spinal cord injury every day. But that isn’t who she is. Leadership, creativity, compassion, personality — Rachael is more aptly described by the characteristics that helped her take full advantage of QLI’s Life Path Services, the same characteristics she uses to create new opportunities for fellow injury survivors and for the greater Omaha community.

When Rachael came to QLI in 2013, she had already endured two months of intensive hospital-based rehabilitation for her spinal cord injury. That injury derailed every aspect of her life — her massive, numerous physical impairments from the shoulders down confined her to a motorized wheelchair; her pursuit of a nursing degree at the University of Nebraska-Lincoln was placed on indefinite hold; and her ability to perform fundamental, everyday tasks had been completely erased.

Such a bleak reality served only to embolden Rachael’s fortitude. “Early on, everyone was worried about me,” Rachael said. “Everyone thought my life was over without it having actually ended. I realized the only way I could be okay was if I could prove to my friends and family that I was okay.” She set goals for herself, goals that existed well beyond simple therapy benchmarks. These goals — returning to school, becoming a healthcare professional, living independently — quickly became the guiding signposts for her clinical team.

Like Rachael, her QLI team rejected pessimism in favor of creative problem-solving. Where others might settle for acceptance and simplicity, Rachael’s team asked “Why not?” During sessions of physical and occupational therapy, times with QLI’s Life Skills team, even during functional training in kitchen and living spaces with QLI’s residential staff, Rachael’s program snowballed momentum toward a successful return to the elements defining her life.

Weights, range-of-motion exercises and targeted core training gave her the upper-body strength to graduate from a heavy, cumbersome and conspicuous powered wheelchair to a sleek manual chair. And within months she re-enrolled into a fulltime college schedule at the University of Nebraska Omaha, this time trading her nursing studies for an interest in psychology.

Rachael’s contagious, effervescent character fostered dozens of meaningful relationships across QLI’s campus between staff and rehabilitation clients alike. Her natural talent for guiding injury survivors and families through hardship became an undeniable asset. Hand-chosen by QLI’s President and CEO, Rachael was offered a position as a peer mentor for QLI’s spinal cord injury population within weeks of graduating from rehab herself.

“‘What gives me purpose?’ is the question I had to ask myself,” Rachael said. “As a nurse, I wanted to be there for the most crucial moment of someone’s life. Make a positive change. I realized there are other ways to fulfill that purpose.” Rachael Johnson doesn’t spend her time worrying, doesn’t waste energy reliving the night when she fell asleep at the wheel, doesn’t accept pity or sympathy or sorrow as a substitute for firm determination.

Instead, her life continues onward, a perpetually forward-looking journey. Rachael lives independently, drives her own vehicle and now enjoys life as a graduate of the University of Nebraska Omaha. She seeks to earn her master’s degree and eventually become a child life specialist.

QLI’s involvement in her life hasn’t ceased either. If anything, QLI has only augmented Rachael’s natural inclination to give back to the Omaha community and survivors of severe injury abroad. In 2016, she wrote as a contributor for the Omaha World-Herald as an advocate for spinal cord injury
and mental health awareness, presented her story to hundreds of visitors to QLI’s rehabilitation and care facilities and was one of the first Omahans to enroll into a brand new adaptive scuba diving certification program — setting a precedent for individuals of all physical abilities to follow suit. And in 2017, she and another QLI rehabilitation graduate were the first wheelchair users to participate as models during Omaha Fashion Week, inspiring the event to
incorporate a dedicated focus on universal access and fashion design.

In conversation, Rachael overflows with gratitude at the support she has received. She beams with pride when she talks about having so many exciting, extraordinary opportunities. And she smiles coyly — with instinctive humility — whenever she hears all she has done for the men, women and families at QLI.

Rachael Johnson doesn’t do off-days. And as a result, she not only forged her own life path, she set the foundation for countless others to feel pride, accomplishment and hope. It’s a journey she’s taken with relentless zeal, guided by the optimistic warmth of a key credo: “As bad as anything seems, it can only get better as long as you don’t give up on yourself.” 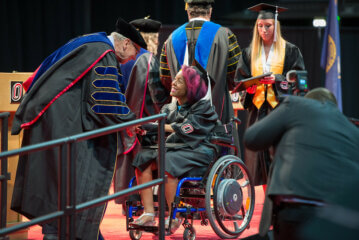 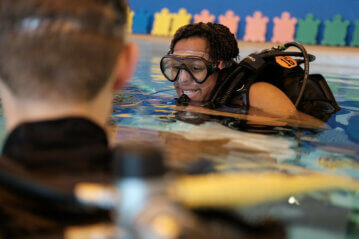