On the edge of campus, in the last bay of QLI’s maintenance garage, there lives a space that serves a unique purpose. A small but mighty group gathers with the focus of challenging themselves to building strength, confidence and camaraderie. The workouts are new every time—five sessions a week offered in a blend of in-person and online mediums and designed to test participants’ minds, bodies, and spirits. They are not here out of any obligation. At GRIT, it is not just a workout. When the participants come through the doors, they become athletes.

“I couldn’t quite wrap my head exactly around what I wanted it to be,” says Stephanie Roob, Director of Nutrition at QLI. She envisioned a fitness program that—in parallel to QLI’s model— addressed the mind, body and spirit. This program would be specifically designed for athletes with a variety of diagnoses and adaptive needs—a model that did not currently exist.

Roob reached out to local CrossFit Omaha owners to further develop the concept and GRIT was born. After applying for and being awarded a grant, equipment was purchased and scholarship money established to aid client payment for the program. In 2019, QLI’s GRIT program became an official CrossFit affiliate. Initially, clients were hand-selected to begin the pilot program and within the first year of operations, GRIT “blossomed” as Roob 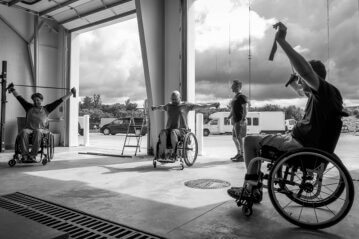 CrossFit itself was founded in 2002, dedicated to answering the question of what it means to be “fit.” The program was built on a foundation of three fitness standards: the first being a practice of the ten general physical skills; the second, that the athlete in question must “divest” from preconceived fitness notions—noting that an essential ability to perform well in known and unknown physical tasks; the third, a promise to incorporate fitness regimens that touch all the metabolic pathways for human energy—the phosphagen, glycolytic, and oxidative pathways.

All ten general physical skills that form CrossFit’s first standard apply to the goals of GRIT, as they are universal and applicable to all regardless of ability. With the first two—cardiovascular endurance and stamina—GRIT achieves these through the core exercise format. Every session begins with a cardio warmup (such as utilizing a rowing machine) before a transition to a progressive endurance task (increasing the weight of a barbell after a handful of sets). The results of strength, flexibility, power, and speed (the third through sixth physical skills) in GRIT may arguably be more visible than a traditional CrossFit class. Former QLI client and GRIT athlete Kent Templien notes his ability to transfer quickly in and out of a car, evidence of improved strength and capability. Further, his time at QLI was spent in a powered wheel chair, but through therapy and participation in GRIT, Templien transitioned to a walker, sometimes even ambulating around campus for mentoring sessions just using a cane. An added benefit to the program, Roob calls attention to the social connections that form between athletes, noting that as GRIT and the CrossFit exercises promote competition with oneself, the community bonds and feeling of those involved naturally grows. They’re each other’s “cheerleaders” in Roob’s words.

Encompassing the seventh through tenth skills—coordination, agility, balance, and accuracy—a group of volunteers present at each GRIT session work to ensure that all these remaining skills are met. If a client utilizes a powered wheelchair and has difficulty standing independently, volunteers are at their side guiding them through a workout, such as one with weighted squats. The coordination skill is met when these volunteers guide the athletes through each new exercise in a slow and measured manner at the beginning, or start with an easier weight to begin the first group of sets. Agility is dependent on the individual athlete’s physical ability and GRIT has concurrent workouts that are structured to ensure full participation. If an athlete doesn’t have use of their legs and a squatting exercise is next up, a similarly exertive exercise is provided. No one is left behind, and all are pushed to achieve their best. 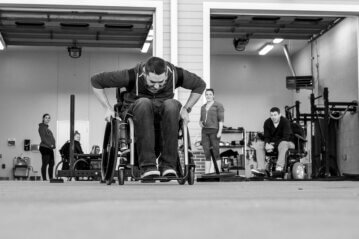 GRIT fits well within the second standard—divesting preconceived notions of fitness and exercise routines. By the program’s nature, it is inherent that one must eschew preconceived notions as GRIT is entirely adaptable to meet the needs and requirements of each athlete. The rehabilitation of a client at QLI is a divestment of some aspects of life prior to an injury and an investment into an adaptable return to life environments post-injury. GRIT represents this same concentration of a fitness divestment that is turned into a long lasting investment into the strength and renewed ability of the client.

With the third standard, each metabolic pathway contributes uniquely to fitness training. At the center of their production is adenosine triphosphate (ATP), a molecule that transports and releases chemical energy for cellular processes. The phosphagen pathway is noted as having a rapid ATP production rate and is trigged through “…short-term high-intensity activities lasting about 1 to 30 seconds in duration, such as sprinting, weight-lifting, or throwing a ball” (ACE Fitness 2019). The glycolytic and oxidative pathways are similar in that they are trigged through longer term activity, but the former does not require oxygen. The glycolytic pathway’s ATP production is linked to high-energy longer-term endurance activities (30 second to three minutes), while the oxidative pathway’s production is the slowest, only requiring low-energy activity.

The Benefits of Adaptive Fitness

Scholarly and clinical articles on the benefits of CrossFit in relation to any adaptive variations are hard to come by. CrossFit itself has only been around for twenty years, and the prospect of adaptive progress is known to many in the United States, but a search on Google Scholar for adaptive CrossFit shows few results in comparison to studies written on able-bodied programs. Many of the adaptive studies are tied to in-development programs overseas. A CrossFit overview study published in 2018 by a research team from the University of Sao Paolo performed a meta-analysis on existing studies regarding CrossFit benefits, noting that “…a high level of evidence demonstrating positive outcomes has yet to be established in the literature” (Claudino et. al., 2018). The studies included in the meta-analysis examined injury risk, psycho-social behavior, and physiological effects of the program. Different aspects of bias were looked at and rated for the studies analyzed (including performance, detection, attrition, and reporting biases). With the inclusion of 32 articles for a systemic review, results showed an overall high risk of bias for 30 articles.

Fortunately, research on general exercise for individuals in a post-injury setting is plentiful. A 2010 study from the University of Washington split 156 individuals who were between six months and five years post-injury into a high-activity and low-activity group. The study found that “…those persons with [traumatic brain injuries] who recounted higher levels of exercise per week also reported less depression and improved sleep, community participation, and overall quality of life” (Hoffman et. al., 2010).

A 2017 study from Umea University examined heightened aerobic exercise in sedentary elderly individuals, noting the activity “…has the potential to improve cognition in a broad…sense…based on episodic memory, processing speed, working memory updating, and executive function tasks” (Jonasson et. al., 2017). Further in line with these general exercise studies, QLI’s clients have reported significant benefits from their time in GRIT.

The strength of the program lies in its ability to capitalize on post-rehabilitated clients, compounding strength in order to achieve real-world physical gains, such as an improved ability to transfer out of a wheelchair and better gait mechanics. Chad Arnold was one of the first to join the program and says, “You learn early on not to make comparisons with others in GRIT. Everyone is unique. After discharging from QLI, I began to notice the significant changes GRIT made in my day-to-day and the functional gains I had.”

Adaptive Fitness During the Pandemic

Additionally, mental gains are just as evident from GRIT athletes, especially during the pandemic. At the zenith of its growth GRIT was forced to temporarily shut its doors in 2020 at the pandemic’s onset. Fortunately, by adapting via online sessions known as teleGRIT, GRIT’s impact was able to continue. Arnold was involved in teleGRIT and notes that “…the community part of GRIT is just as important to me as the actual workouts. To be able to see someone on the screen and have a conversation with them during the sessions was crucial. Once you have an injury, you can’t always see 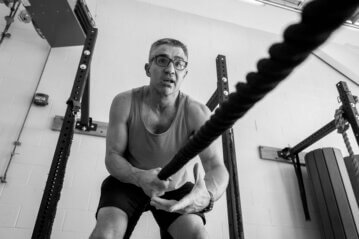 the future or how things will look, but when you see adaptive technologies and the things people like you are able to do, it opens your mind to say ‘I don’t know anything about that but I will try it out.’ GRIT is a big part of that.”

The Future of GRIT

In the latter half of 2021, GRIT opened its doors once more for in-person sessions. Roob notes that a key focus of GRIT in the near future will be looking into location expansion. Currently housed in one of the maintenance bays on QLI’s Rehab Campus, an ideal location would offer more space and equipment, which could accommodate more members of the Omaha community.

In addition to expansion, Roob’s general goals are also seen in providing an open gym experience for clients, one in which they can work out at their own pace without being in a guided personal training session. Another significant goal is streamlining client transportation to and from the gym site(s).

Jeremy Wolzan—a GRIT athlete—summed up his journey through the program in 2019. “It has changed everything,” said Wolzan. “My walking, my posture, and my coordination. My day-to-day life is easier and I’m better for it.”