QLI’s Gait Lab is adorned with equipment that look like robotic contraptions out of a science fiction film. Alongside the far wall and against a row of mirrors lives the Armeo® Spring. To the layperson’s eye, it’s a robot arm reaching out for something, unattended. In function, the device is a complex arm and hand training virtual reality system—a conduit for exercising and isolating arm, wrist, and hand movement.

The Armeo® Spring was developed in 2007 by Swiss therapeutic robotics developer Hocoma. The company, founded in 1996, launches products aimed at addressing therapy-assistive concerns with the extremities. Initial devices focused on exercising the lower extremities. The Armeo®  Spring was the first device from Hocoma to address the upper extremities.

The Armeo® is able to meet clients’ needs where traditional arm and hand therapy do not. For example, excessive repetitions during traditional therapy methods can lead to fatigue. Additionally, the nature of progress within traditional sessions may be difficult to quantify. These modalities often pale in comparison with engagement. Other therapies, like mobility and gait training, garner significant engagement, given that the direct connection is to a patient’s goal of walking again

Conversely, the Armeo® Spring provides the repetition needed for neuroplasticity and the return of function through fun and engaging game applications. The device also provides the therapy team the metrics to document the client’s progress.

Segmented into three sections, the robotic arm is meant to test and strengthen a client’s use of their full 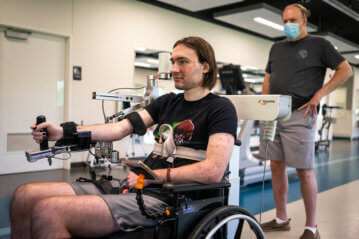 arm, forearm, hand, and wrist through a variety of game user interfaces. It should be noted that while the Armeo® Spring is a robotic arm, it does not move for the client, but is there for support and ease of movement under the control of the client.

The therapist opts for a targeted area to test. Should the wrist be selected, games will focus on honing quick movement and reflexes of the client’s wrist. One such game that helps these areas is a kart-racing game that places an emphasis on speed and quick directional changes. Another games involve an objective of catching a character or object on the screen, the in-game representation of the Armeo® being the target and crosshair on the screen.

Following a neurological injury, the neural pathways that inform arm, wrist, and hand movement may be damaged, meaning that a routine and repetition-based therapy program is ideal to allow for the movement to become independently regulated once more by way of neuroplasticity. Further, each game in the Armeo® is chosen based on objectives and repeated sessions with the Armeo® games offer clients observable metrics for their progress. A racing game not only tracks the final position, but the tokens along the track the player maneuvers to collect, totaling a score at the end of the race. Such a running total and individual identification for each client means that progress over time can be actively tracked and referenced.

A 2013 study from the journal Neurología tested the efficacy of the Armeo® Spring on individuals with hemorrhagic strokes. The individuals who participated in the tests were patients at a neurorehabilitation center, and were all around one year post-stroke. Utilizing various modes of measurement, such as “the Motor Assessment Scale (MAS), the Manual Function Test (MFT), and the Wolf Motor Function (WMF)” (Colomer, et al 2013).

The MAS, when tested for an individual with a stroke, aims to document, on a scale of 0 (severely affected) to 6 (normal). As the study was focused on the Armeo® Spring, only tests involving upper arm movement were conducted. Results indicated that the device has a substantially positive effect on clients with strokes. To compare results, tests were administered at the “onset” of a stay, the “end” of one, and “end plus four months,” (Colomer, et al 2013). The same time periods were also used for the WMF (testing speed and strength) and MFT (testing arm motion and manipulation).

The results were found to be statistically significant for all except the WMF—yet all generally improved with each successive testing period. As such, given that the study was conducted between 2009 and 2011, in the burgeoning years of the Armeo® Spring (it was released in 2008), the core objectives and results of the device have remained the same and Hocoma has improved its offerings through improved updates to Armeo® Spring features and games.

The Armeo® Spring is a fundamental catalyst in client recovery. So much of what is done in daily life requires arm movement. From lifting a glass of water to opening a door, these actions require a degree of function and independence to carry them out. QLI occupational therapist Corey Cundall notes that “the device allows us to isolate the movement within the arm. With repetition and time, this allows for an opportunity to better transition to hand or wrist movement, ultimately without supports, further facilitating a client’s independence in their daily tasks.”

An example of an Armeo®-focused occupational therapy session in action can be found here.