All the terms for describing brain injuries can cause one’s head to spin: open or closed; penetrating or non-penetrating; mild or severe; traumatic or non-traumatic. Even further, a dry point-by-point explanation of these terms may result in even more confusion. Given this inherent quagmire of diagnoses, histories, and terminologies, one of the best ways to think of brain injuries is through an analogy.

Imagine two families walking along a rainy street. The parents of both families are holding a very large umbrella big enough to cover everyone in their life. With the left-side family, the umbrella says—“acquired brain injuries,” and the right-side family’s umbrella says “non-acquired brain injuries.” In a most basic manner, these two distinct categories are the best places to start when discussing brain injuries. On the umbrellas, there is also a smaller characterization. The left one says “after birth,” while the right one says “before or during birth.” 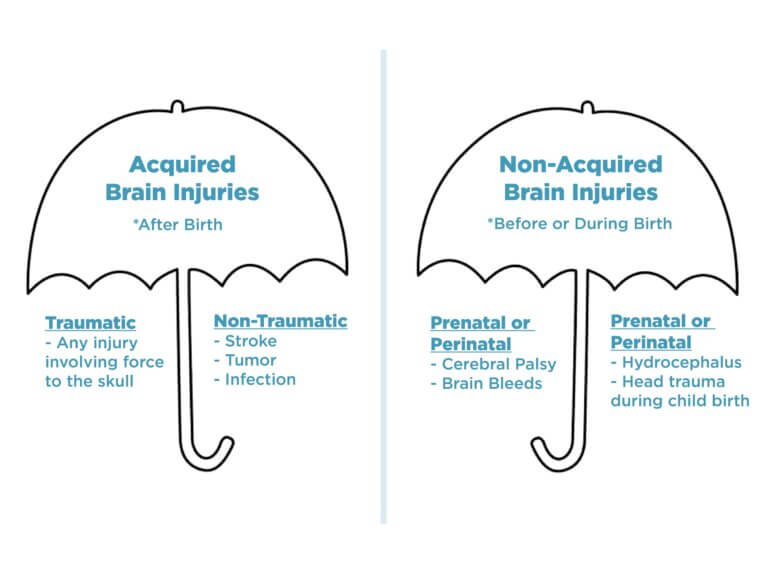 Non-acquired brain injuries occur in the prenatal or perinatal stages—that is, before childbirth, or during the birthing process. These include cerebral palsy, brain bleeds, hydrocephalus, and head trauma (among other injuries), which result from oxygen deprivation to the brain. General asphyxia occurs in around 1 out of every 100 live births. Another common non-acquired brain injury is newborn jaundice, occurring when bilirubin, a “byproduct of red cell replacement,” exceeds normal levels, becoming very dangerous if left untreated.

A concussion, while mild, is a good window into traumatic brain injuries, which occur whenever a force is applied to the skull. Even though the head and skull may not impact or strike a surface, the force of rapid deceleration (either by gravity or through another object stopping the velocity of an individual or vehicle) is powerful enough to cause movement within the skull that can result in traumatic injury.

“This is why we have airbags in cars,” says QLI’s Director of Psychology, Dr. Jeff Snell. “While they only add microseconds, they work to slow down the rate of deceleration, which may prevent the force of an accident from severely impacting or moving the brain.” The CDC estimates that around 1.5 million Americans suffer a traumatic brain injury each year, though this figure encompasses the entire spectrum. A moderate and a severe traumatic brain injury both result in an individual needing some degree of ongoing care (such as admission to an acute and post-acute rehabilitation facility). Two significant figures the CDC reports relating to severe traumatic brain injuries are the 230,000 yearly hospitalizations and the 80,000-90,000 individuals who have long-term needs following the injury.

Just as significant in this second umbrella is the other facet of acquired injury—non-traumatic brain injuries. “These are usually onset through stroke, viruses, tumors, or infection,” says Dr. Snell. “A lack of oxygen getting to the brain is common with this non-traumatic subset.” Such a symptom and event described by Dr. Snell is an anoxic injury, where a sustained lack of oxygen to the brain leads to brain cell death. Cardiac arrest and drowning are among the events that may cause anoxic injury.

What we eat and drink, how often and intensely we exercise, and how long we sleep can play a role in our susceptibility to non-traumatic injury. For example, individuals who are obese, heavy drinkers, or smokers, and are physically inactive may be at a higher risk for a stroke. Around 795,000 Americans suffer a stroke every year. With other non-traumatic injuries, such as a tumor or infection (like encephalitis), the onset comes from an outside virus that grows and attacks the body from the inside. The Encephalitis Society estimated that 35,000-52,500 Americans are diagnosed with encephalitis annually, while the National Brain Tumor Society estimates that around 90,000 brain tumors will be diagnosed in the United States in 2022.

Even amidst all the complexities of the umbrellas, countless avenues of information are out there to deep dive into the intricacies of various types of brain injuries. Regardless of whether an individual has a traumatic and non-traumatic injury, or if it is mild or severe, resources exist to help navigate the hurdles that lie ahead. For more information on these resources, click here.